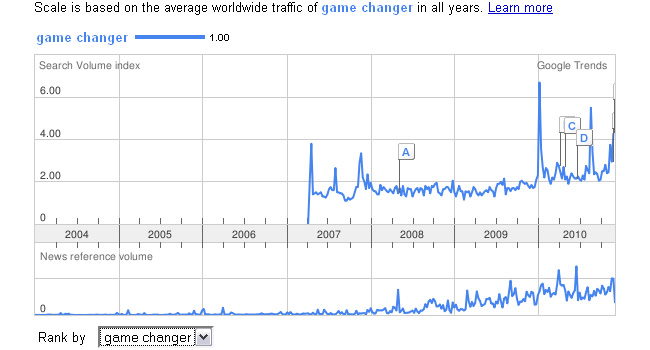 I had this excellent post by Tim Phillips on Research-Live bookmarked for quite some time, and actually there is not too much that I can add to it. His notion that ‘game changing’ has been rapidly on the rise was something that I noticed as well. I hope he doesn’t want to slap me for the title I’m using for this article (must be really good SEO for me) but I was reminded about his article when I was using Google trends to review some hype words.

It’s actually quite hard to do that because most word combinations like ‘pro active’ have been in use for quite some time, sometimes in a different context as well. A methodology like scrum, on the other hand, is mostly used in rugby to describe something different and doesn’t show up on the radar as clear as ‘game changer’. As Tim showed is has been rapidly on the rise, thus raising the question if there is really anything game changing or if it’s maybe just good old marketing.

Using ‘game changing’ in your bingo game at works seems to have been pretty pointless before 2005, and game changers themselves only appeared in 2007. What is interesting is the ‘game changing’ rapid way these words seemed to have spread.