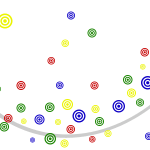 ‘Traditional methods like interviewing and surveys seem to prevail and have of course proven their value along the way.’, is what I stated in December last year when discussing research on Social Media. And of course these will remain a, if not the biggest, factor in (market) research, but research in different ways seems to be more and more present.

I also used Harris Interactive as an example of a company that was already starting to use Social Media research as a means of adding to traditional research. Traditional because online surveys and private communities might be ‘new’ but they’re still quite traditional in their essence. The blog ‘Research Rants’ pointed me to a new initiative by Harris Interactive where they’re asking you to connect your ‘social’ profiles to an engine that will analyze your actions in Facebook and/or Twitter.

It seems like they’re using their normal polling panel to build a new panel that uses social media activities instead of surveys to make data-points and build a profile of your opinions and behaviors. We can only guess (thus far) about what and how they will analyze you, but it’s certainly an interesting development.

What do you think, is this ‘paneled’ approach a good thing, or is there a future where researchers will analyze everyone’s tweets, which are usually public anyway? (ie: ‘The web is the panel’) How is the panel used, is it used to make a sample and then include the (pre?) analyzed communications, or is it the other way around? Both ways seem to have advantages.

As I commented on Research Rants; ‘ survey might be online now, but it’s still a survey (quite often with little extra options/tricks over a ‘paper’ one), maybe even an online version of one that was (is?) conducted offline as well.’. This Social Analysis could add a complete new dimension to research, but it could also turn out that in fact all these communications tell us about the same as traditional research…