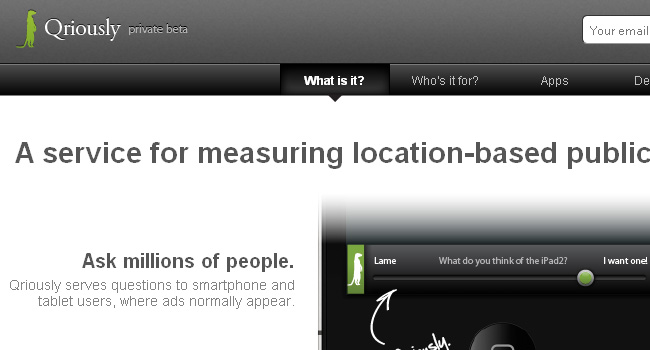 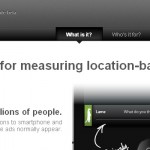 I’ve been discussing the possibilities for location based surveys already. As especially reviews are tied to a certain place it’s only natural to at least offer surveys with a location component. The new company Qriously is now offering such a thing: short location based surveys. With this offer they hope to set up a new mobile revenue model and ride the ‘quick insights’ hype on mobile devices.

The question to why people would even go to take a survey is solved by them in to ways. First and foremost they offer their questions as inapp advertisements on mobile devices.

The location based public opinion tool has recently raised 1.6 million US dollars in a funding round and the seem keen on offering app developers a new way to make money on free mobile apps. As the questions will be displayed as in-app advertisements, much like is already custom on for example Android or Apple’s iOS, they’ve got the question how potential respondents would even get to the survey covered. The actual ‘survey’ consists of a question that can be answered on a slider scale. When answering, they naturally don’t have the leave the application, so this shouldn’t be too much of an extra step in answering questions. As an extra incentive to answer a question Qriously also offers an insight in how others have answered compared to yourself.

If the questions that people get to answer will remain fairly location based this would give answering some extra relevance to the respondent. We could say that this is the second solution Qriously has found to the engagement problem. Offering relevant surveys to people does good things for the response rate and if they manage to keep questions not only location-dependent but also really relevant to that location this could seriously help completion rates and deliver quick insights. Perhaps the only remaining question is how many people will really want to answer a question while they are in the midst of playing a game or checking their email. The short, easy, format of the questions could be the right way to go at this problem, though especially if they would integrate ways of interacting with the actual game or other type of application, for example in the form of credits. This is both to the benefit of the respondent, who gains an extra reward as well as to the developer who makes his revenue model more usable. Of course Qriously would gain from more integration as well, as completion rates could rise, they would have to weigh this against downside: the extra efforts such an extended app would take.